The Most Effective Recruiting Technique You’re NOT Using

The traditional job interview is like a one-way mirror: It’s a great way for the employer to assess an applicant, but it doesn’t allow an applicant to get an accurate view of the employer’s company culture and workplace dynamic. That’s just one of the many drawbacks of the standard recruiting process … but is there a better way? Some say yes.

HR specialists admit there’s no surefire way to predict whether a new-hire will turn out to be a good cultural fit in the long run. But with millennial employment turnover rates approaching 37% within the first 13 months on the job, HR department leaders are under pressure to attract and retain the right candidates — those whose personality, temperament, and work style not only complement the company culture but also contribute to the overall success of the team.
To do that, hiring managers use a variety of techniques — from the Predictive Index personality test and the behavioral interview method to blind assessments and even artificial intelligence-based recruiting. Those tools help employers weed out unqualified applicants, but they don’t offer job candidates any reciprocal way to identify unsuitable work situations.
Bill Bice, founder and CEO of boomtime, is all too familiar with the problem.
“The traditional interview is a very contrived process,” Bice says. “Most job applicants can pull off a pretty good interview, but the problem is that they tend to be a one-way affair, so applicants just don’t get a good feel for the business. One reason a lot of new-hires quit is because it’s not a good cultural fit. There’s nothing about the traditional job interview that helps them determine that up-front.”

Truth is, short of actually hiring them, there’s really only one way to determine whether a job applicant will be able to gel with his/her prospective teammates, handle the day-to-day pressures of the position, and thrive within the overarching company culture: Put that applicant in a situation where they can see for themselves what it might be like to work for your company — and where you can watch and evaluate them as they do so.
That’s exactly what boomtime does by hosting periodic “hiring parties” whenever they have multiple job openings. According to Bice, the hiring party has been a key part of boomtime’s recruitment process since the company first started 12 years ago.
And it really works for them: In just the first seven months of 2018, they were able to hire six new employees — which is no small feat given Albuquerque’s highly competitive job market.
“The key is that the applicants get to meet the people they’re going to be working with in a casual cocktail party atmosphere, and the advantage for staff members is that they get a say in who gets hired.” Bice explains. “Right out of the gate, it simply works better.”

The Hiring Party as an Applicant Evaluation Tool

To the casual observer, a hiring party looks like an ordinary after-work employee get-together — complete with food, decorations, games and prizes. But beneath the surface, there’s a lot more going on.
In her book, Stop Interviewing, Start Partying, Deborah L. Reese explains that during a typical two- or three-hour hiring party, job candidates are tested and evaluated by dozens of staff members as well as members of senior management.

“Applicants and employees will participate in activities that on the surface appear to be just fun party games but are really tests to reveal the existence or lack of certain qualities and traits in the applicants. These games will reveal applicants’ true colors and whether they will mesh well with your existing culture.

“At the end of the party, you and your employees will decide who is worth bringing in for the next phase, but by this point you’ll have a very good idea who will be successful in your company and who won’t.” 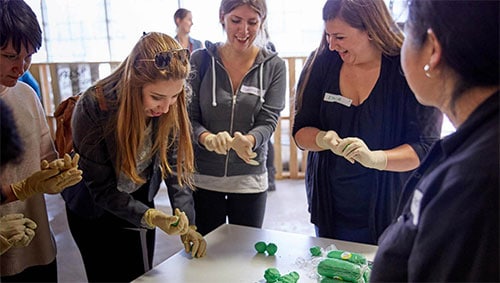 Job applicants participate in an exercise at a Lush cosmetics hiring fair.

Are Hiring Parties Right for You?

For most companies, hiring parties are just one step in a multi-stage recruiting process. The job posting is done first, followed by a phone screen interview, then an invitation to the next scheduled hiring party for qualified applicants. Later, a final one-on-one interview is usually conducted for top-ranking candidates who received positive evaluations from employees and managers at the hiring party.
Because it forces job applicants to prove their social interaction skills, the hiring party is a useful tool for companies with job openings in customer service, client relations, and even technical support. But the games can also be designed to test applicants’ problem-solving and logic skills, or assess how well a candidate listens and follows instructions — making them applicable to almost any type of job.
Despite what you might think, hiring parties aren’t just for tech giants or multi-national corporations that employ hundreds of customer service agents. If you’re running a small- to medium-sized business or a start-up, time is your most precious commodity. And just think how many job candidates you and your staff could evaluate in just a single evening!

The Future of Recruiting

A recent study conducted in the UK revealed that the majority of job seekers are open to participating in unorthodox recruiting activities like escape room challenges, capture-the-flag games, or professional speed dating sessions. By comparison, hiring parties sound quite tame.
In the end, whatever new recruiting efforts you might decide to try, just remember that your employee retention rates can increase dramatically when your recruiting process becomes a two-way — preferably experiential — street.
As Bill Bice puts it, “If you want to hire great people, you’ve got to sell them on why they should come work for you. And if you want to be successful at recruiting, you need to find a different way of doing that. I would never go back to the traditional interview process.”
—————————-
Now it’s your turn! Have you participated in any unorthodox recruiting methods — either as an employer or a job seeker? Tell us more in the comments below.